As you have properly noticed the inventory mods I have created for DS2 are not compatible with the Broken World expansion. So I have created some new ones especially for DS2BW. 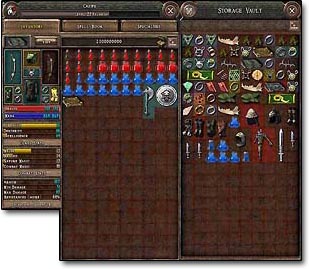 Furthermore we have found a bug in v1.0. I say we, but it was really KillerGremal who found and solved the problem, I just corrected it. So now the mods should be working as intended without crashing. This bug is of course also fixed in the DS2 version of the mods.

In this new batch I have revised the old sizes and created some new ones which make better use of the widescreen format.

Download the one you want and put it into your DS2BW “Resources” folder.

There is NO need to remove my DS2 inventory mod from the DS2 “Resources” folder. The new ones will compensate.

However if you are still using version 1.0 or 1.1 of my DS2 inventory mods, I strongly recommend that you upgrade to version 1.2 (look further down on this page).

In case you are wondering how to get the game to run at a resolution higher than 1280×1024 – it is quite simple.

First right-click on the link for Dungeon Siege 2 or Broken World and select “Properties”. You will get a window looking somewhat like this: 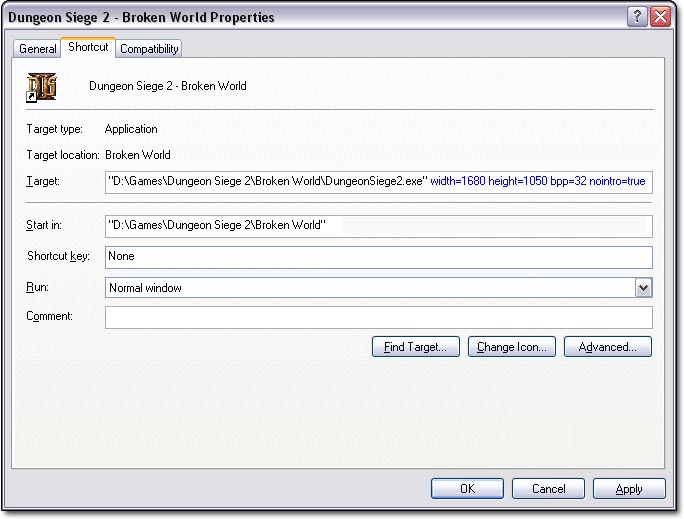 Next locate the “Target” and add the resolution you want to the end of the path like I have shown in blue.

The “width=” and “height=” parameters are fairly obvious.

The “nointro=true” parameter has nothing to do with resolution, but makes Dungeon Siege 2 skip the intro and go directly into the main menu.

This method can be uses with; Dungeon Siege 2, Broken World and Elys’s All*Saves patches. In fact it can even be used with Dungeon Siege 1 and Legends of Aranna as well.

Be sure that the resolution you choose is supported by both your graphics-card and monitor. Also keep in mind that the games are not designed to run at these higher resolutions, so you may experience faults in the graphics. Although I haven’t experience any such bugs yet.

I expect that we will experience the same problem with DS2BW and mods as we do with the DS2. You can read about it in “THE DISAPPERING CHARACTERS PROBLEM !” section below. Elys has also made an All*saves patch for DS2BW (look further down).

I have of course made these mods with the same thoroughness as I always do. But I do not play Dungeon Siege 2 anymore, so guys – you will have to be my ears and eyes from now on.

Please let me know if you encounter any problems or stumble upon any quarks or oddities with these mods.

( The old version is still downloable )

Install by running the DS2BW_AllSaves_v2.msi installer.

Then use the new created “DS2 Broken World AllSaves” shortcut to play.

Allow any savegames to be loaded by the game. This program will not fix Dungeon Siege 2 crash related to savegames. It will just allow the game to recognize any savegame version.
An experimental “SeeFar Hack” slider has been added to the loader so people can play with it to enjoy far view while playing.
The camera has been tweaked to be less restritive whatever are the internal map settings.
The new shortcut can accept any Dungeon Siege II:Broken World command line parameters.