As a kid if I would complain to my grandfather about being bored, his response would be something like:

So I guess as a consequence this is the sort of thing which happens if I am approaching boredom: 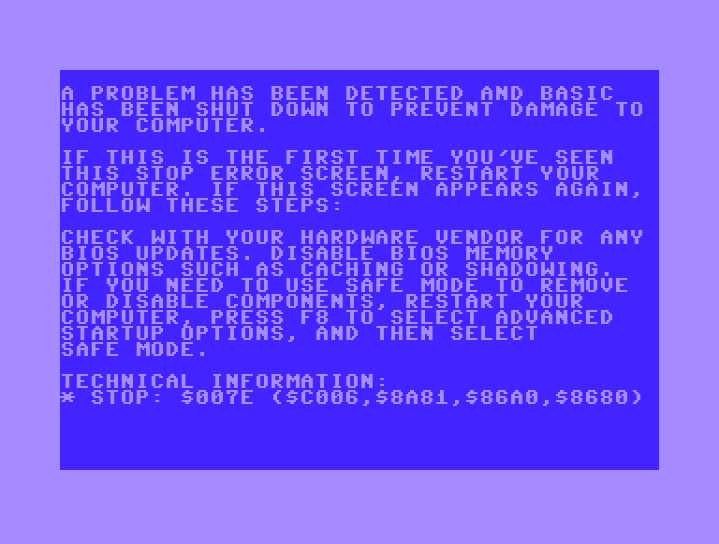 I found a so called “blue screen of death” picture on the internet. 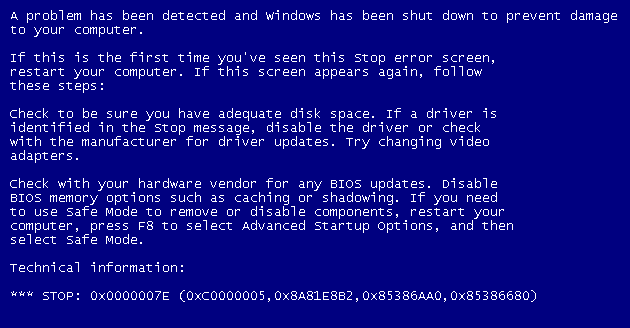 Then I used an OCR scanner program to convert it to text, made some changes, added some line numbers and some “PRINT” commands and finally copy/pasted it into the WinVice C64 emulator.

Since it has come to my attention that this expansion is a bit of a rarity I have decided to make a little blog about mine. 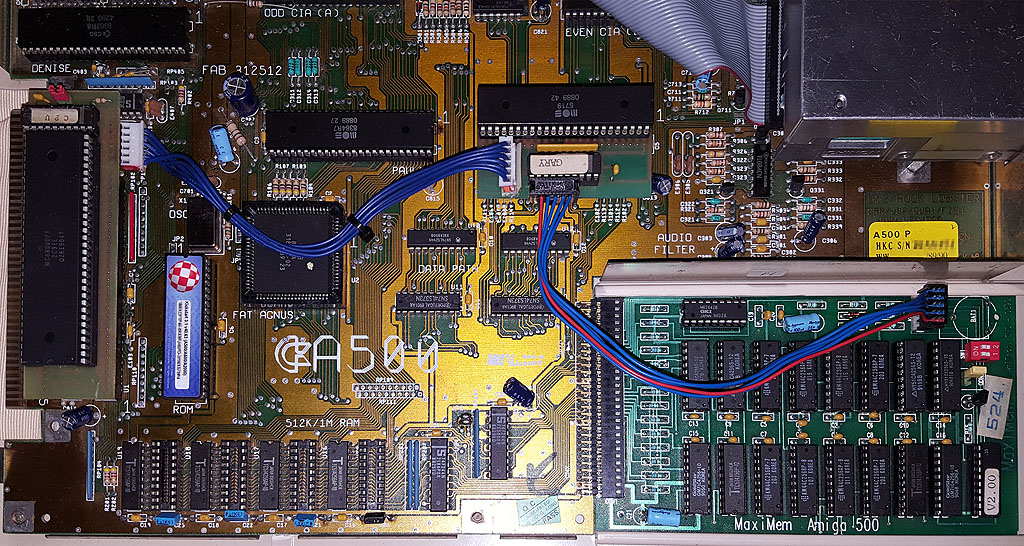 What is special about this expansion is that because of the CPU and GARY adaptors it is able to add up to 2 MB of RAM to the Amiga, so 2.5 MB RAM in total. This does not interfere with any RAM added via the BUS port on the left side. So if you for instance have a HDD box with 8 MB fast RAM, that would bring the A500 up to 10.5 MB in total. 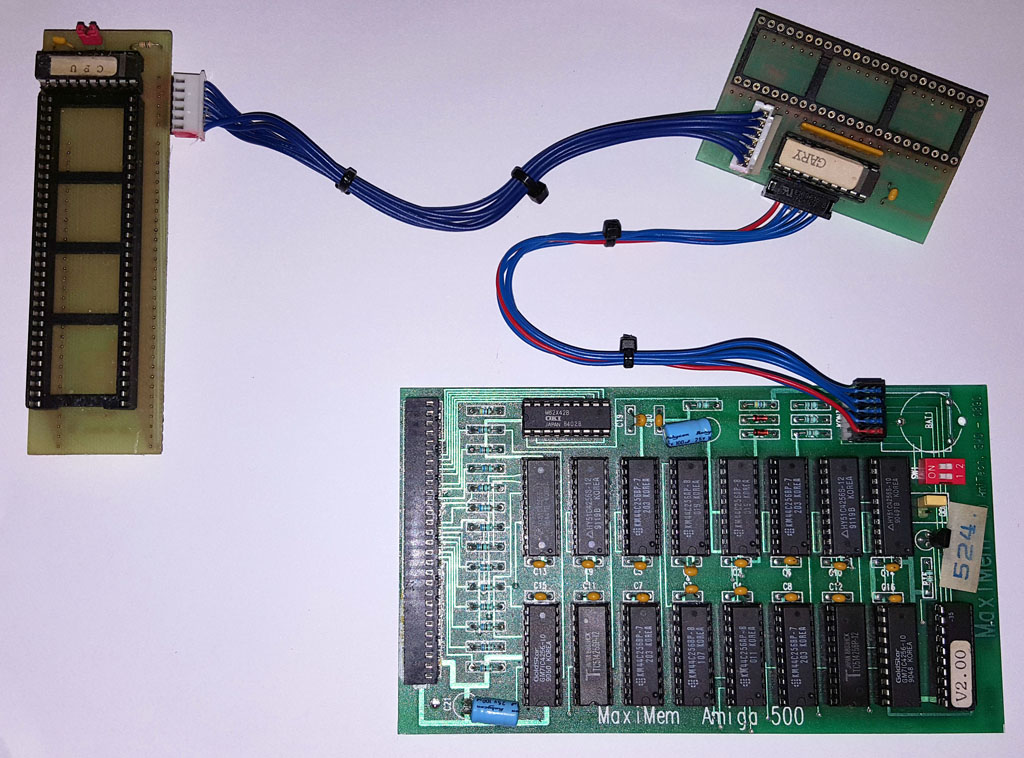 The 2 red dip-switched on the board is for configuring how many RAM chips up have mounted and the yellow jumper disables the expansion completely.

Notice that I have removed the battery and ordered a replacement. Which brings me to last bit of this blog… I have had to make some repairs as shown in this picture:

If you want to checkout everything in more detail be sure to visit: Zhixy’s Gallery

You will also find the Danish manual there or you can view or download it as a PDF by clicking here.

It’s almost been a month since my last post to this blog and a few things have happened since then. 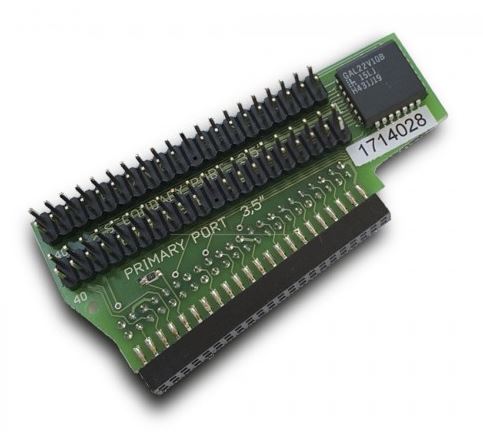 But while I was waiting for it I got some help and insight from a Facebook group (you know who you are and thanks again) into the available filesystems and their limitations. Which first got me thinking and eventually led me to getting some of these things:

They are able to convert back and forth between PATA (or IDE) and SATA totally independent of drivers or any software (I’ve used one of them before in my ZX Evo) .

The thing is I have quite a stack of 40 GB, 80 GB and 120 GB SATA harddrives. Which I had no use for and was either going to sell or toss out. But now with these things I can use modern harddrives in my towering Amiga. They are absolutely brilliant… uhm… that is except for one tiny little bitty thing; they are apparently completely incompatible with the buffered 4xIDE’99 adaptor.

So I had a choice to make 3 CF Cards and a DVD drive or 2 insanely huge and fast (in Amiga terms) harddrives. So I finally decided on not using the 4xIDE’99 in my tower. Don’t worry I still have the other “normal” Amiga 1200 I can use it in.

But I still liked the idea of being able to take the CFs out and popping them into my PC’s card reader. So here is what I came up with instead: 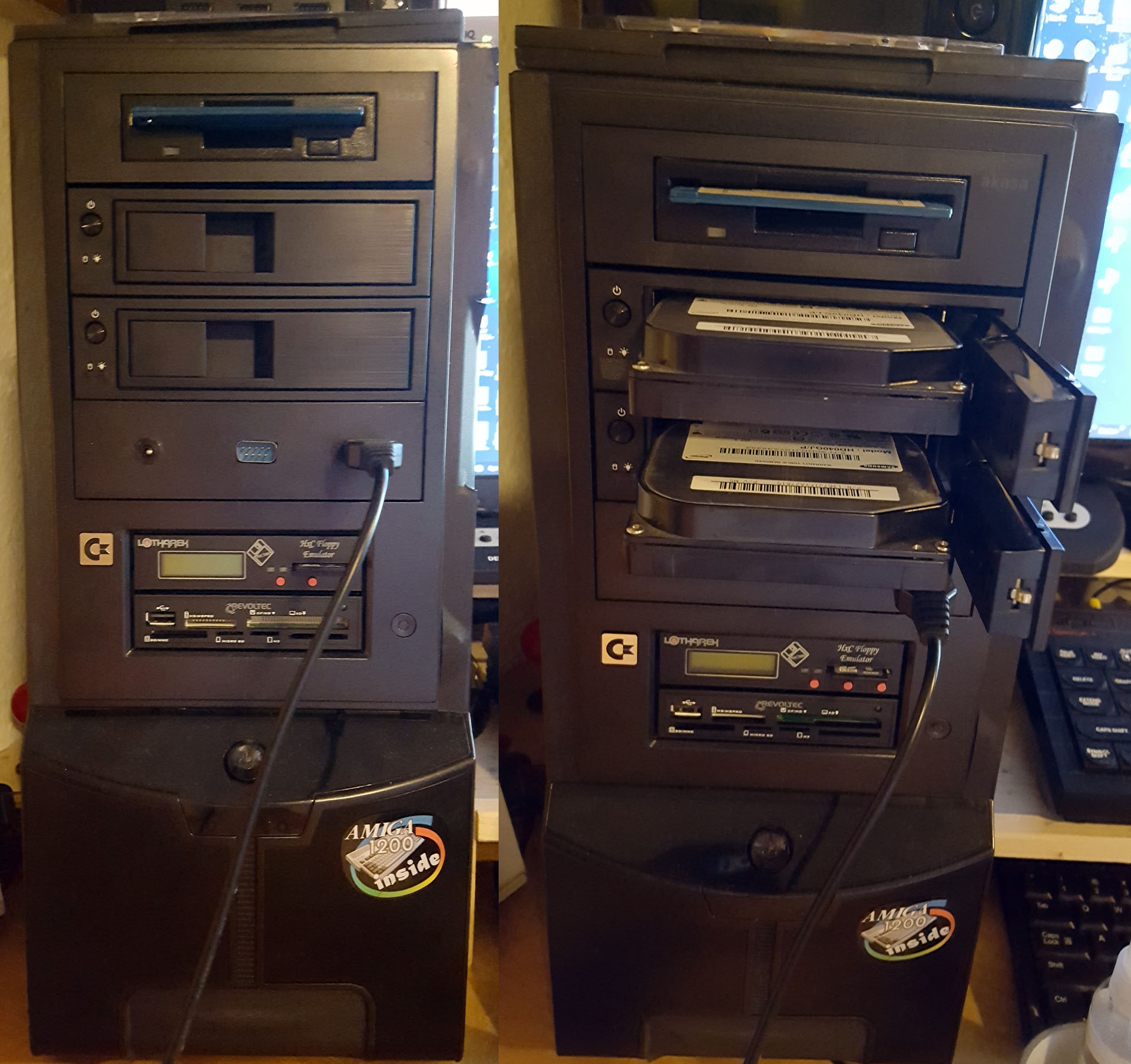 SATA harddrive hot-swap docking bays. No drawers, frames or guide rails needed. I can just turn off the Amiga and pop ’em out and into the PC as I see fit… obviously got a docking bay for the PC as well.

I rearranged the front a little bit, put a RapidRoad USB board on the accelerator and decided to connect it up to a card reader instead of the USB’s at the bottom.

… and maybe some more stickers. 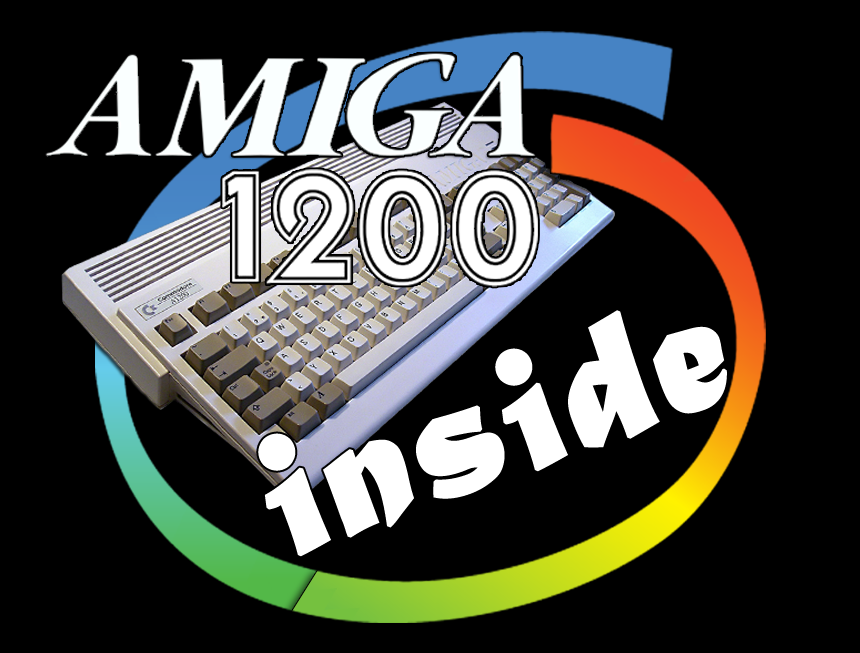 But I guess that’s it… for now…

Sooo… My Amiga 1200 Tower has finally found it’s proper place on my desk next to my beloved Speccy and it’s Russian ZX Evo comrade.

But there is a huge problem (which was kinda foreseen); being inside a boringly ordinary PC cabinet it is totally void of bringing the Amiga funk 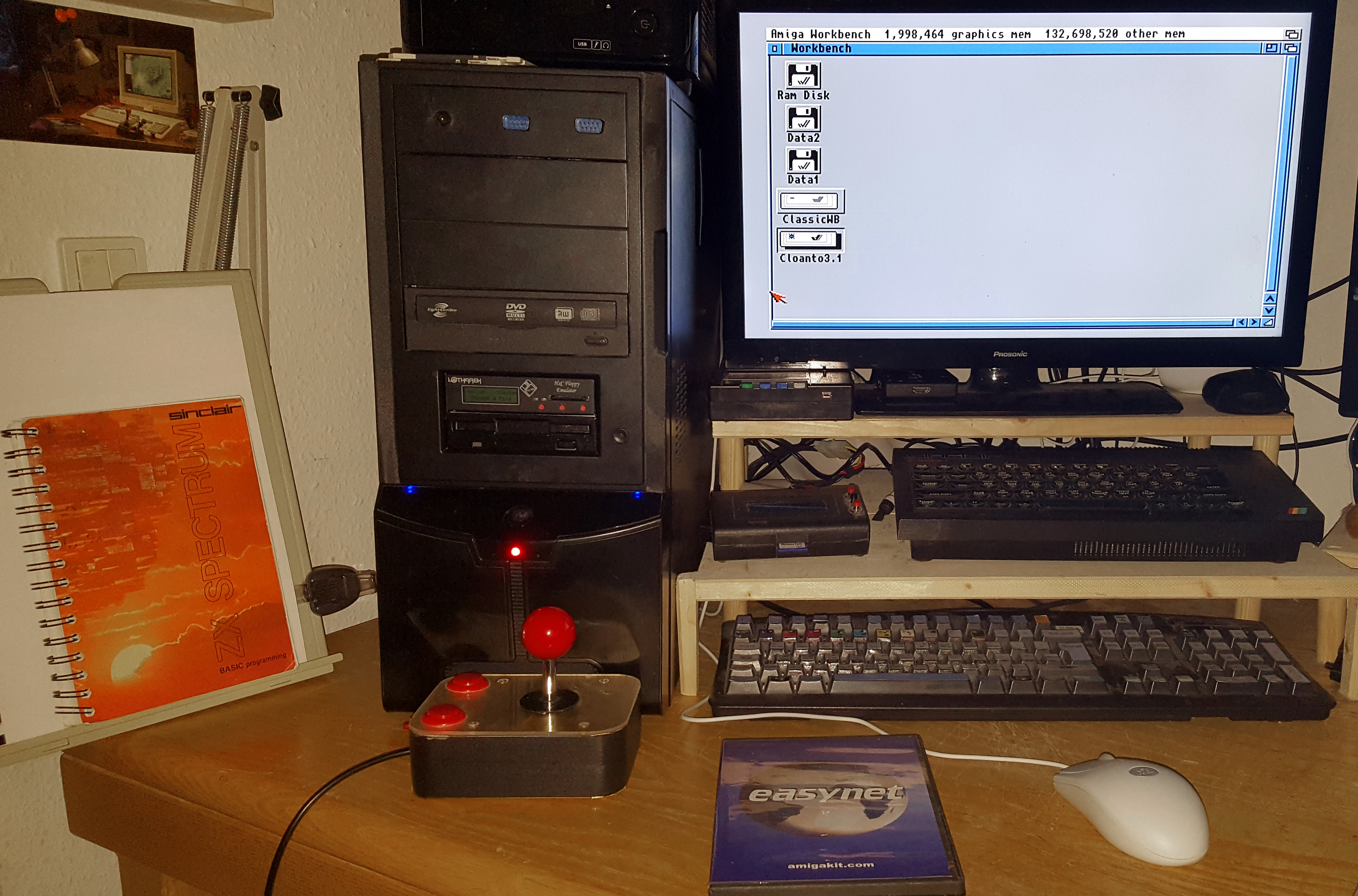 I’m thinking bringing the classic Amiga art in form of stickers of sorts; either bought online or home made (if I have to). 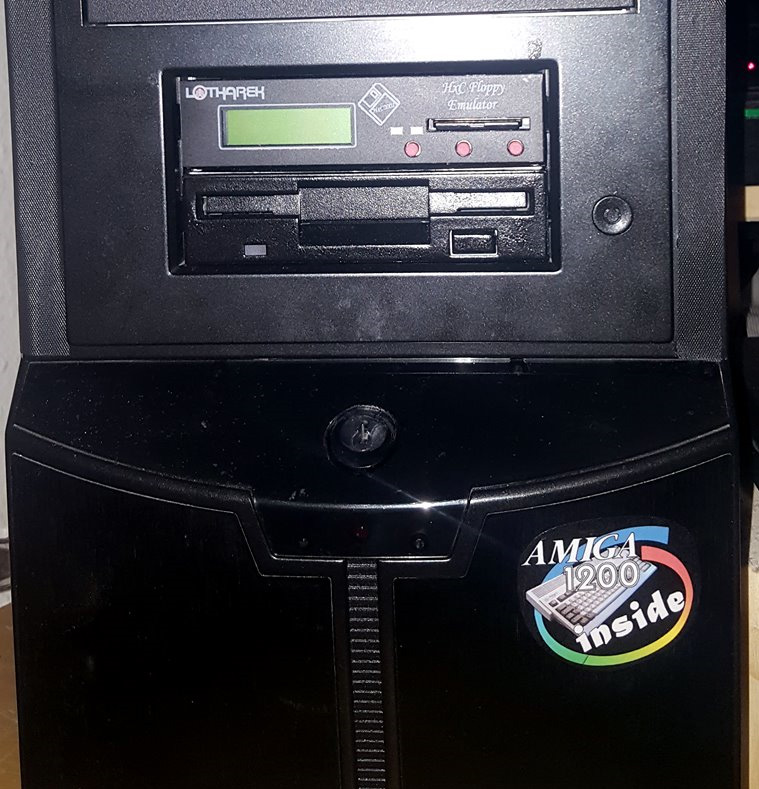 … and I got these in the mail today 🙂 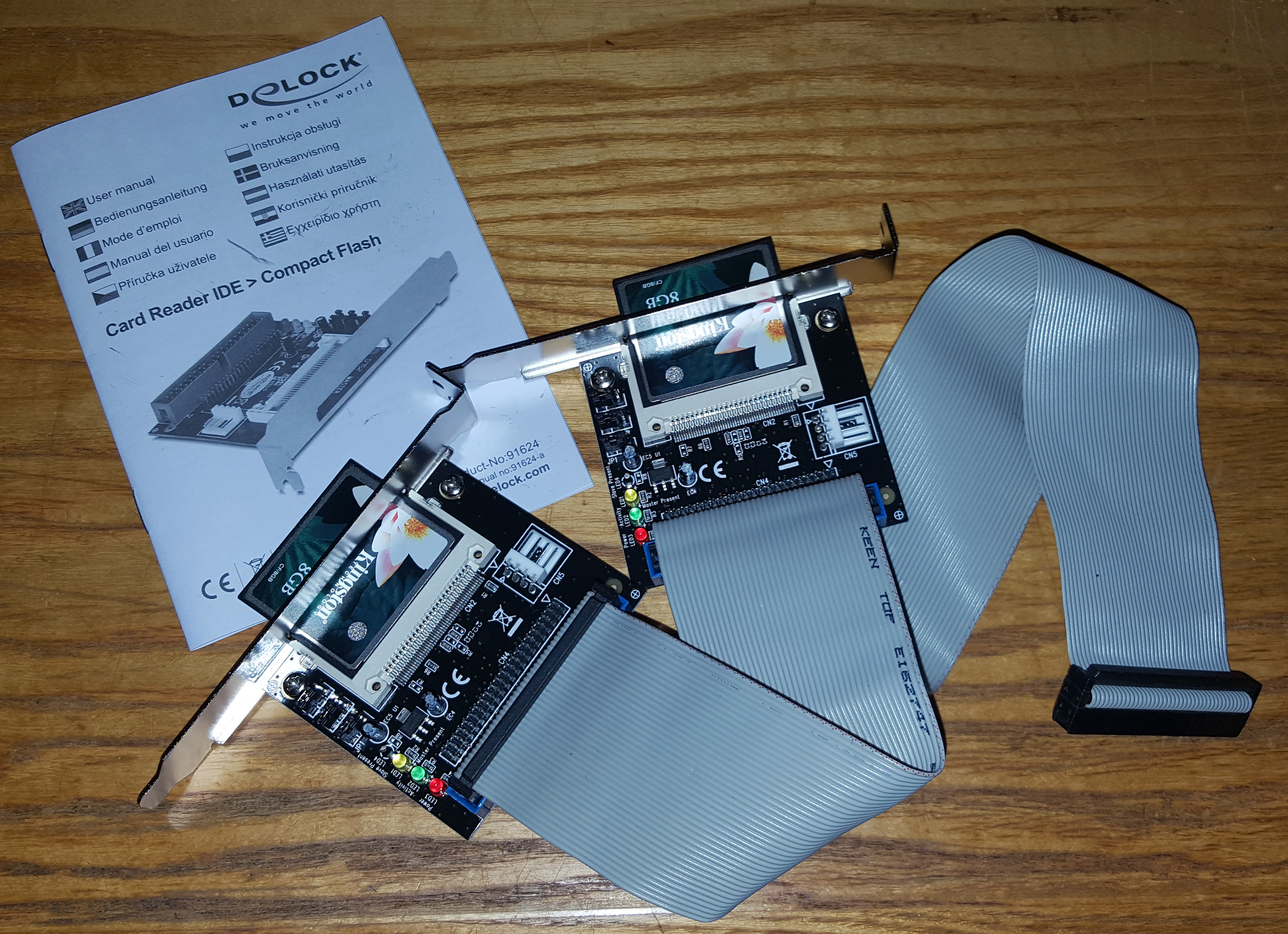 Still waiting for my 4xIDE’99 buffered controller, though

Next up… I’ve added a ACA1233n accelerator daughterboard. 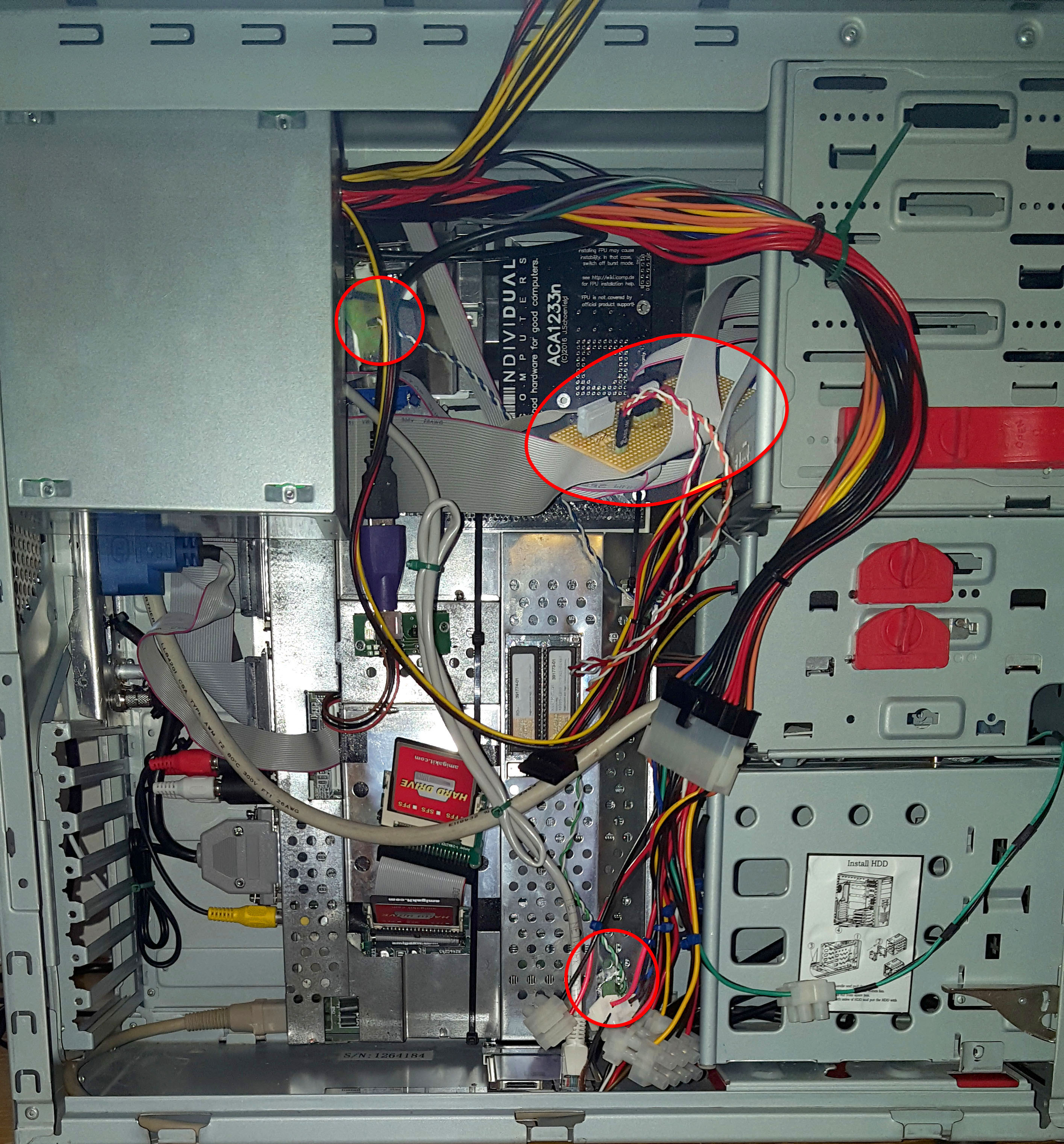 The top-left circle… that’s a modified Jerry+ Joystick adaptor which splits joystick port 1 into a PS/2 compatible USB mouse and… well a joystick in port 1. I have replaced the LED with a jumper so I can connect it to one of the LEDs at the front.

The circle at the bottom is where I’ve added a jumper on the motherboard for the reset switch. 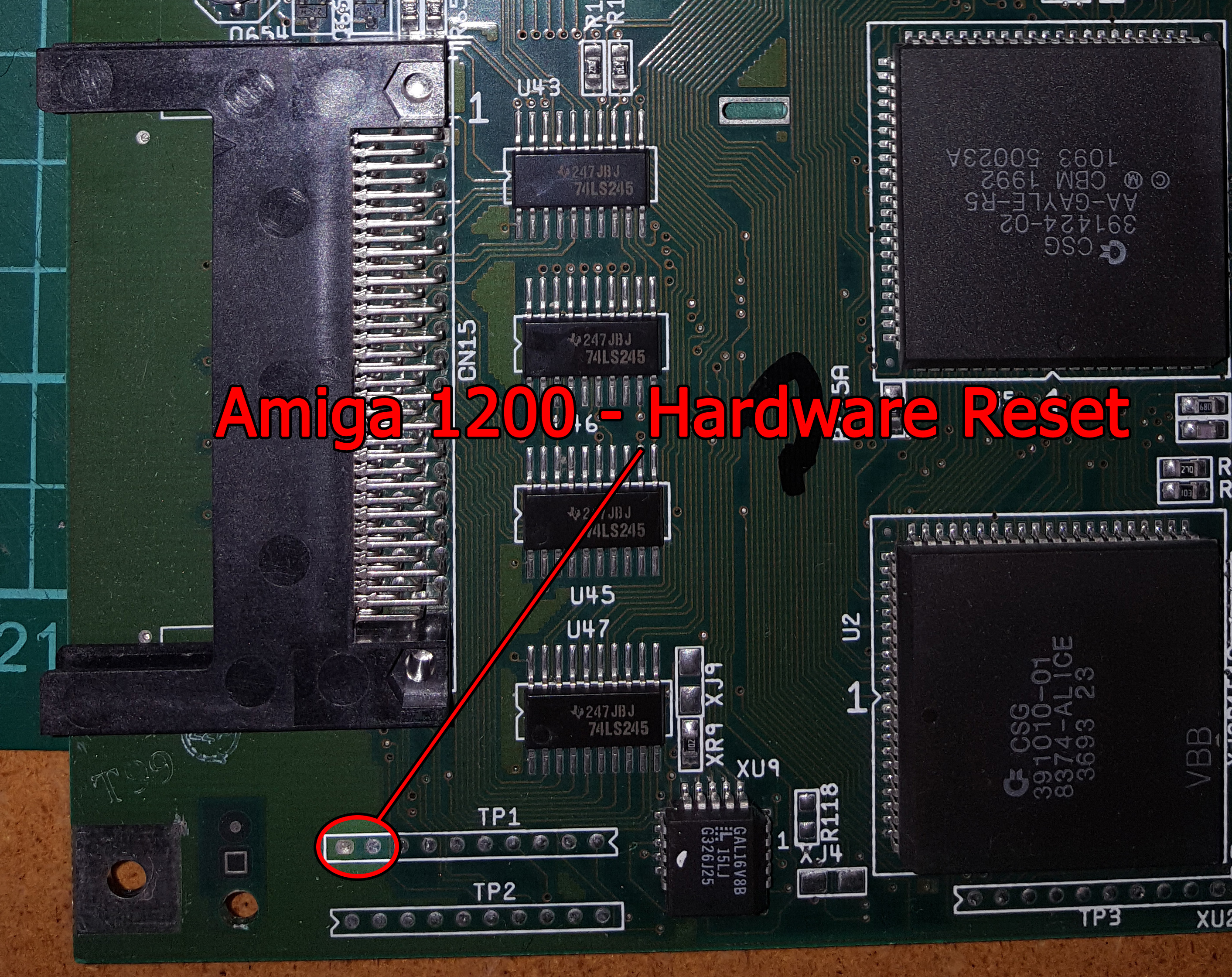 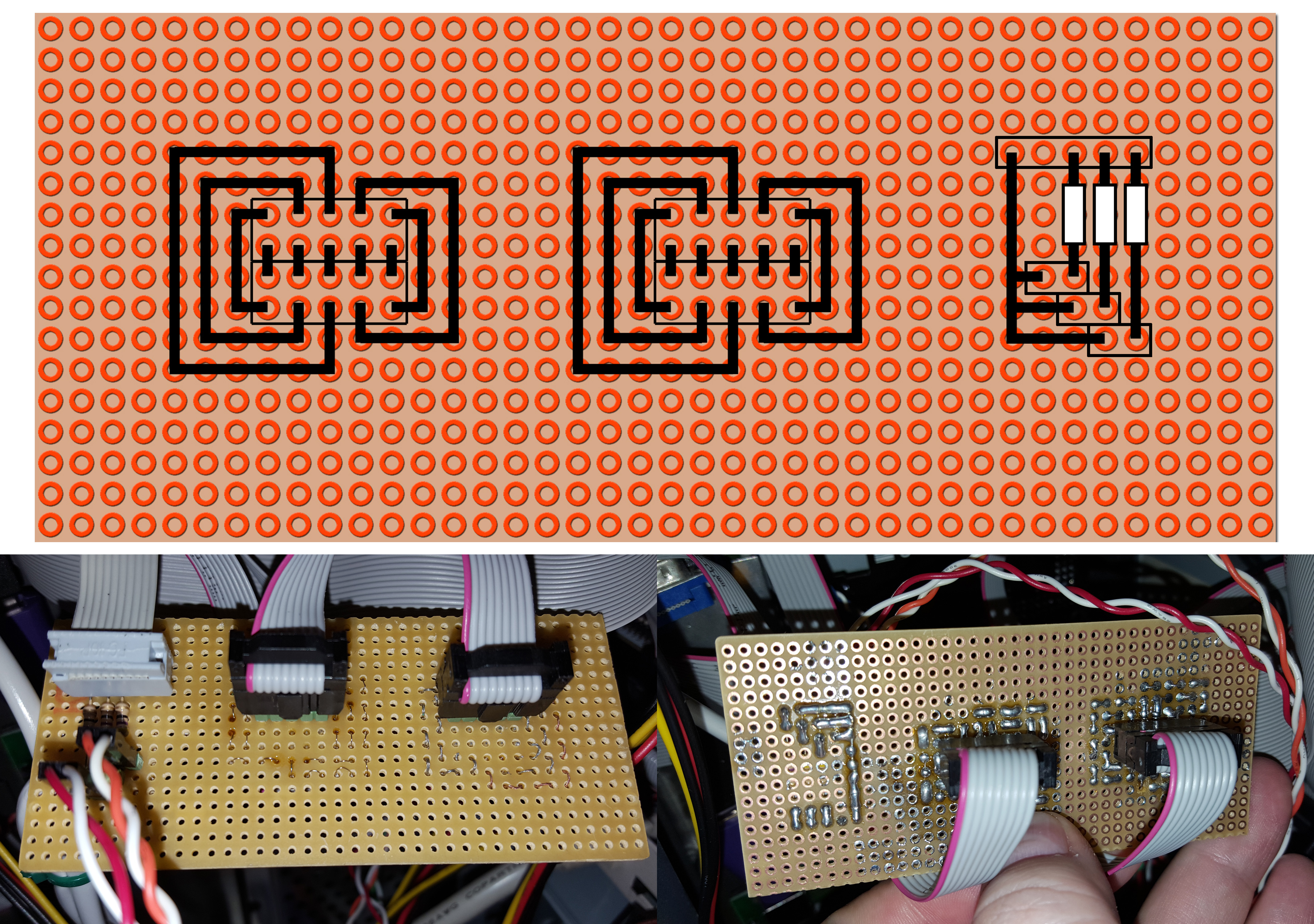 … and the remaining circle is a custom made adaptor PCB to convert the A1200 Power, HDD and floppy LED connector so I can connect them up to the LEDs in the front. Those 3 resisters are 47 Ohms. 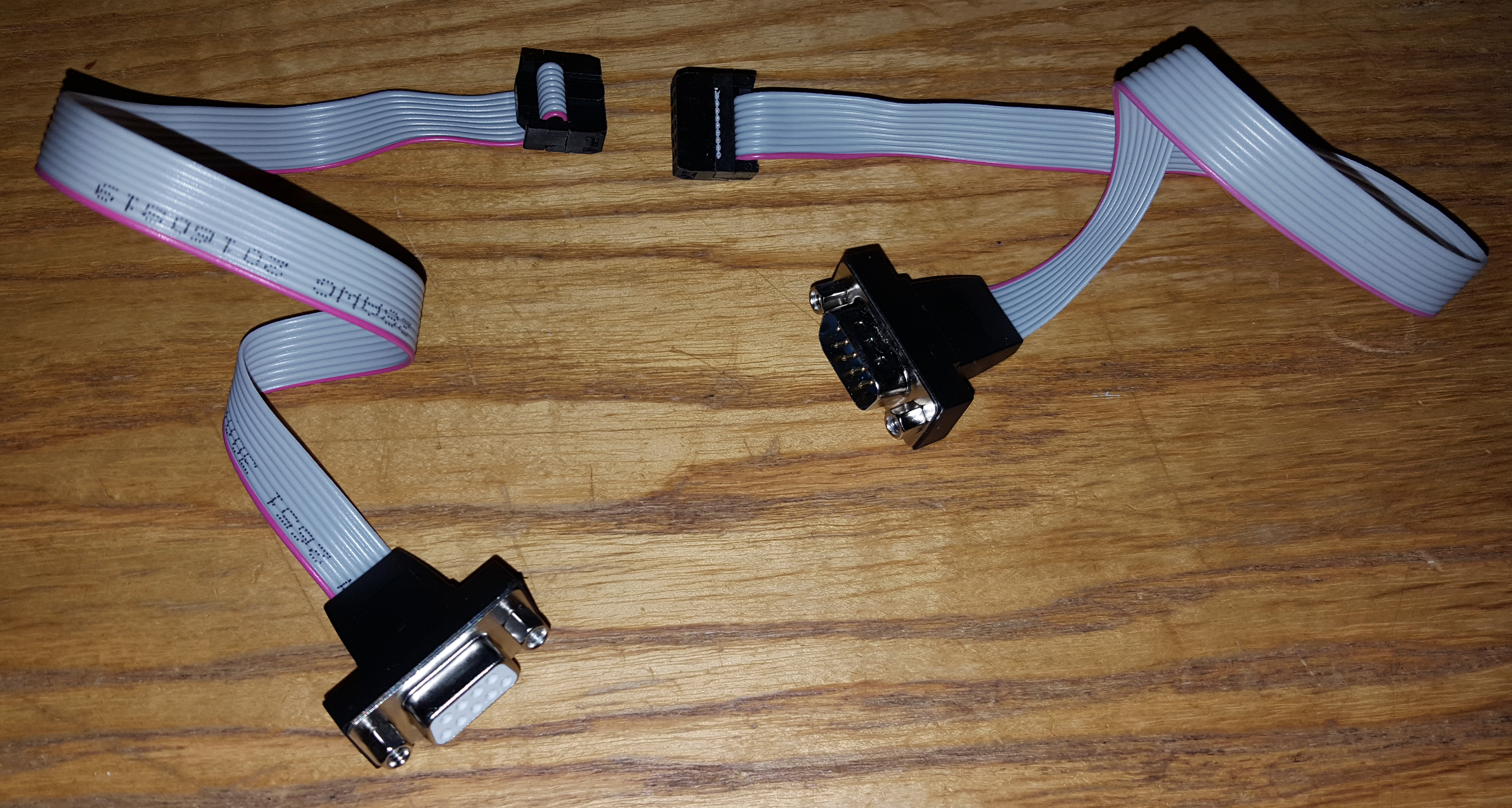 The idea of the those four 10-pin connectors is simply to link cables like above together in order to replicate joystick port 1 and 2 out to the front. The PCB will obviously need to be fastened in some way. 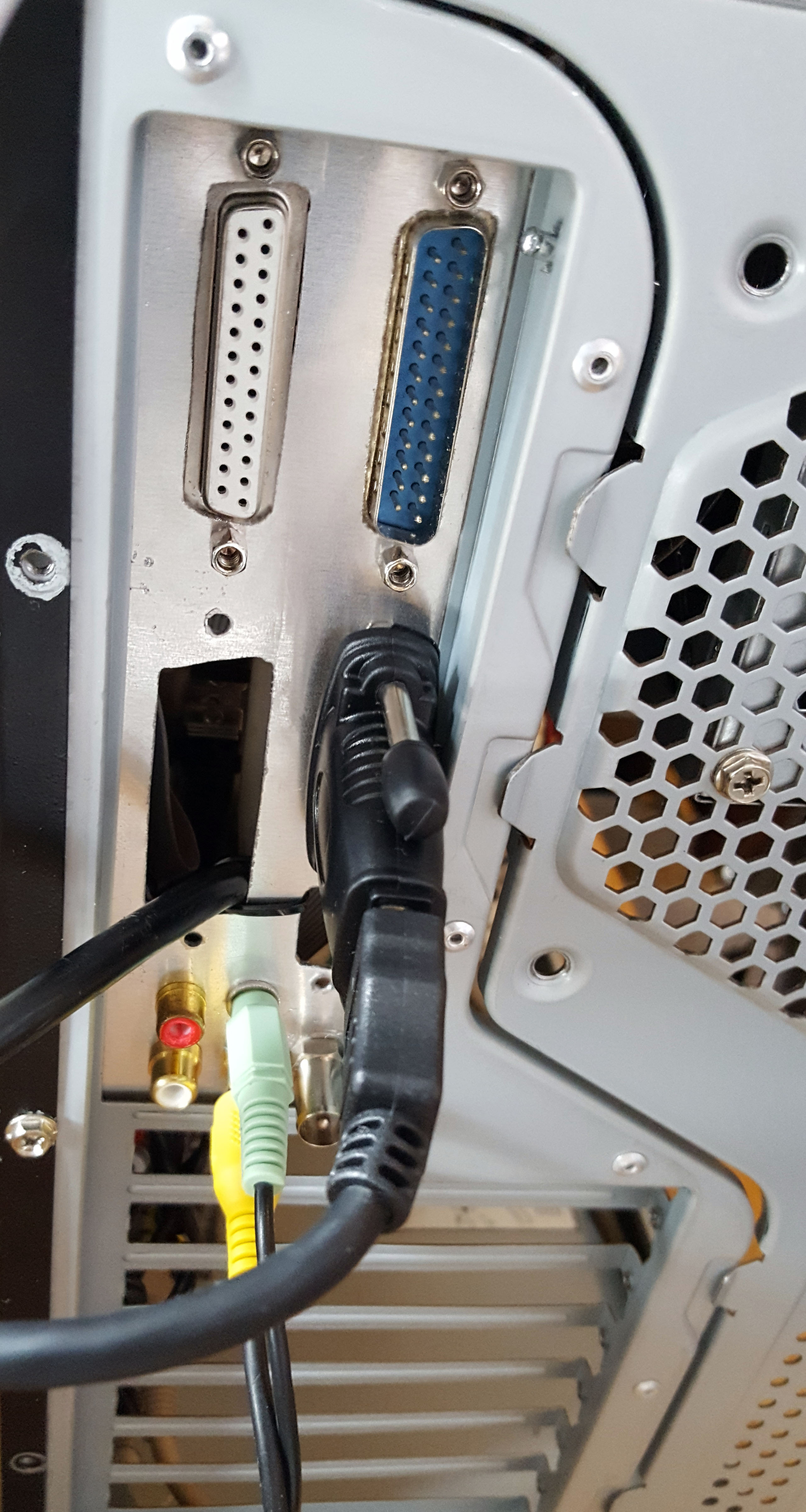 Got the screen hooked up to HDMI via a DVI scan-doubler with a to-HDMI adaptor on it. I’ve had some problems trying to create the RGB-port to SCART and VGA cable. I don’t quite understand why yet, as I have made many of those cables in the past. I’ll give it some time come back to it and try again. For now I’ve just pulled a SCART cable I bought to the insides. Probably going to use the HDMI for the most part anyway.

I’m still waiting for a 4 EIDE adaptor daughterboard, so I can connect up the DVD drive. But the Gotek emulator and floppy drive are hooked up and working. That is an actually Amiga external drive at the bottom (the old ones are the best). It was very yellowed and the front plastics have gotten a coat of black spray paint to match the cabinet.

Here… I did a video of my first real test run for you. Sorry about the poor sound quality. I guess I just spend more money on my retro computers than on cameras. That old second hand Prosonic TV isn’t the best either.

Building a spare Amiga 1200 motherboard into a PC ATX Cabinet. 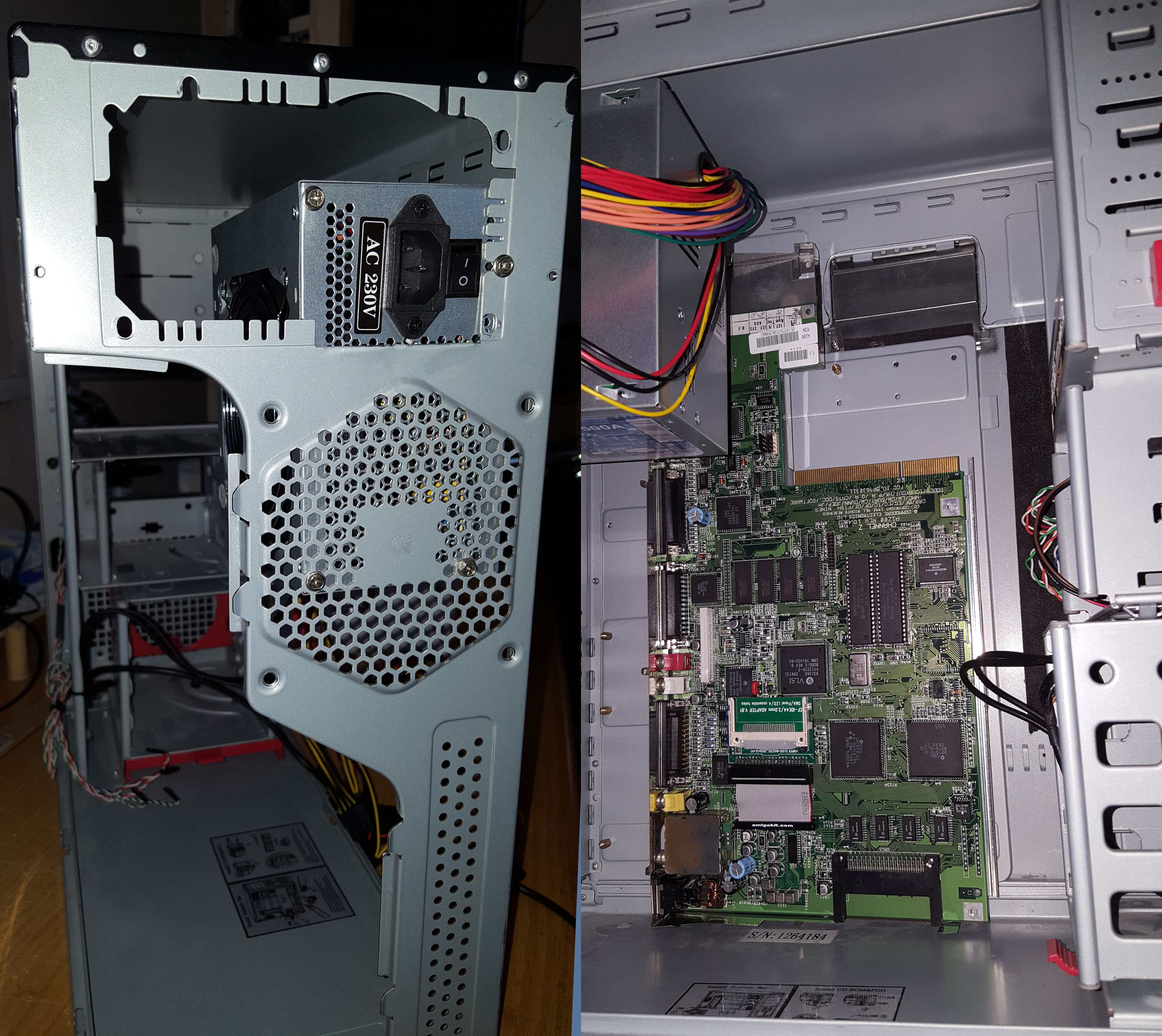 A Commodore Amiga 1200’s motherboard doesn’t just by default (and for good reasons) fit into a standard PC ATX form factor cabinet and even though I’ve found a fairly large cabinet, it still wouldn’t fit without some modifications to the cabinet.

First turning the power supply 90° and mounting it “wrongly” while still making sure can “breathe” seems to be the obvious solution to the problem. 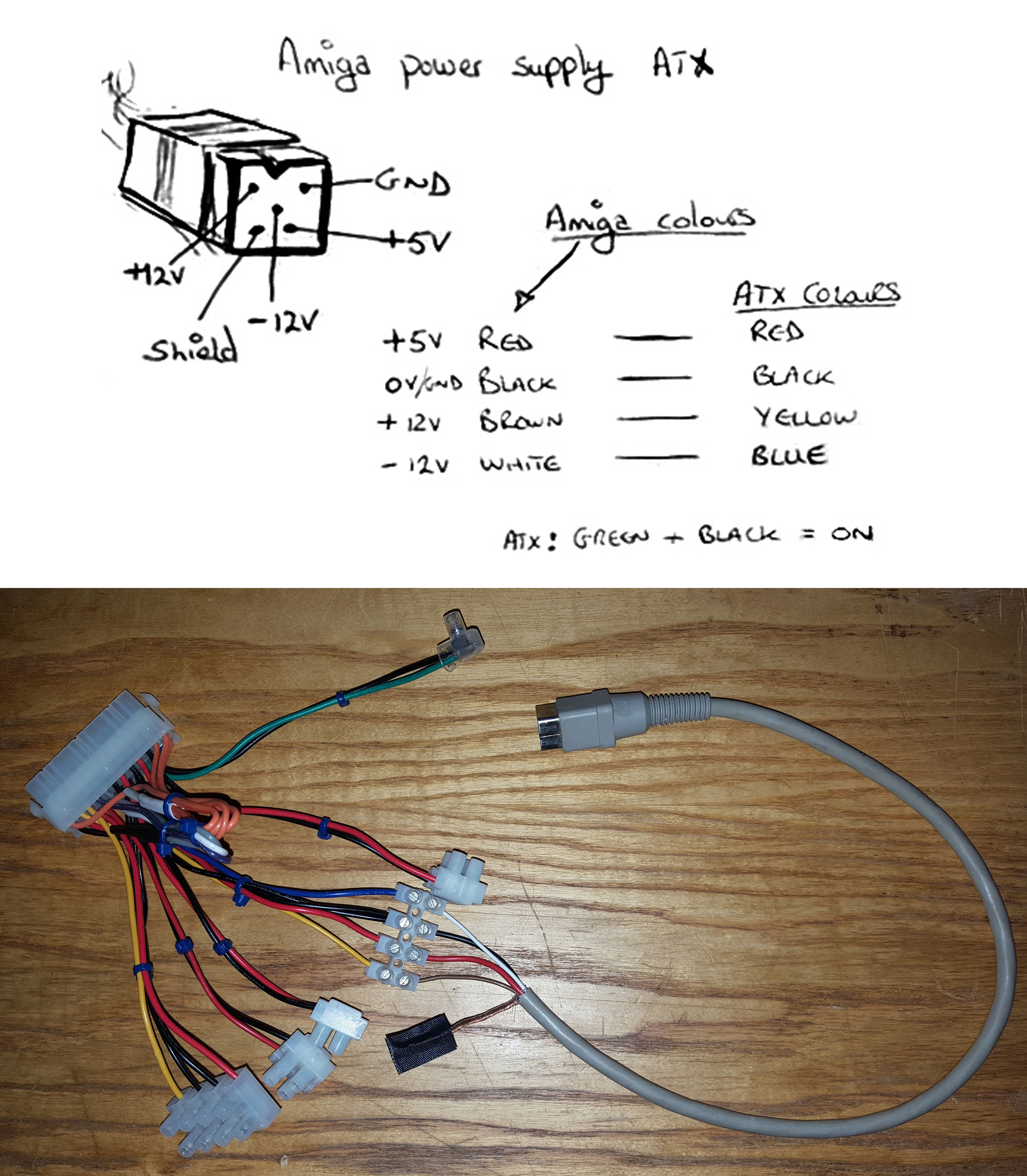 But I wanted to be able to change the PSU without having to do all the modifications again so I chose to butcher an ATX adaptor cable instead. The commodore power plug actually comes from my old C128’s power supply (it had given up) which is very similar to the Amiga’s.

Notice that the green wire is shorted with one of the blacks in order to force the PSU to turn on. Later I am going to connect those two to a on/off switch on the front of the cabinet. 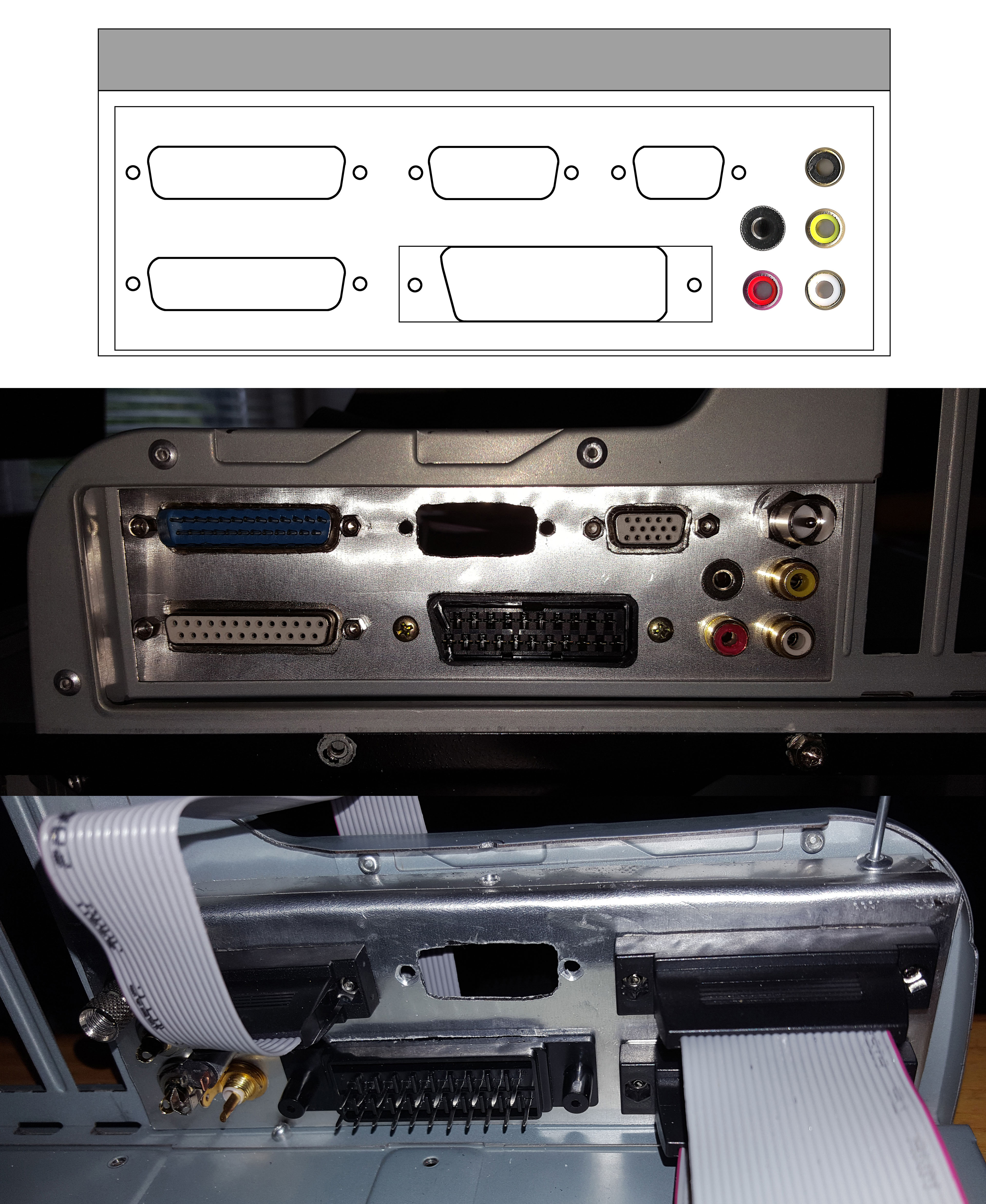 A custom made back plade was needed in order to replicate some of the A1200’s plugs out the back.

The serial and parallel ports were the easiest as I just bought some standard flat cabled plugs, cut them to size and crimped on the matching DB25 plugs.

I have a daughterboard which snaps onto the Lisa chip, giving me a digital DVI (HDMI) port. That’s what the extra hole is for.

The RGB port is going to be represented by a VGA and a SCART plug. The Audio is split into the standard RCA’s, a mini-jack and obviously the SCART plug too. The RF gets a “modern day” startard RF plug.

Any extra floppy drives are going to be mounted inside the cabinet, so the external disk drive port doesn’t need to be replicated.

I’m also going to add a PS/2 mouse splitter-converter and replicate the joystick ports to the front for easy access. 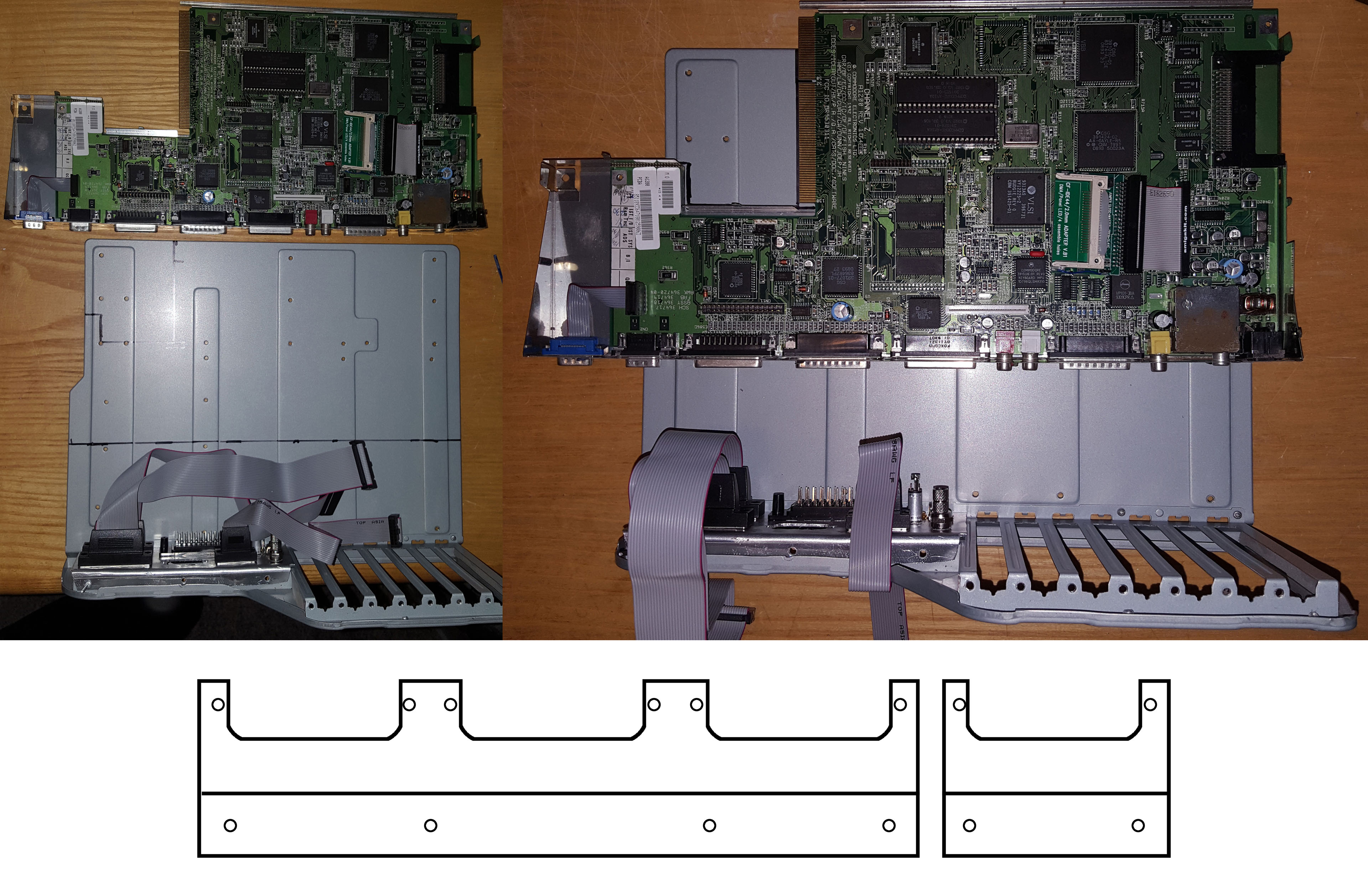 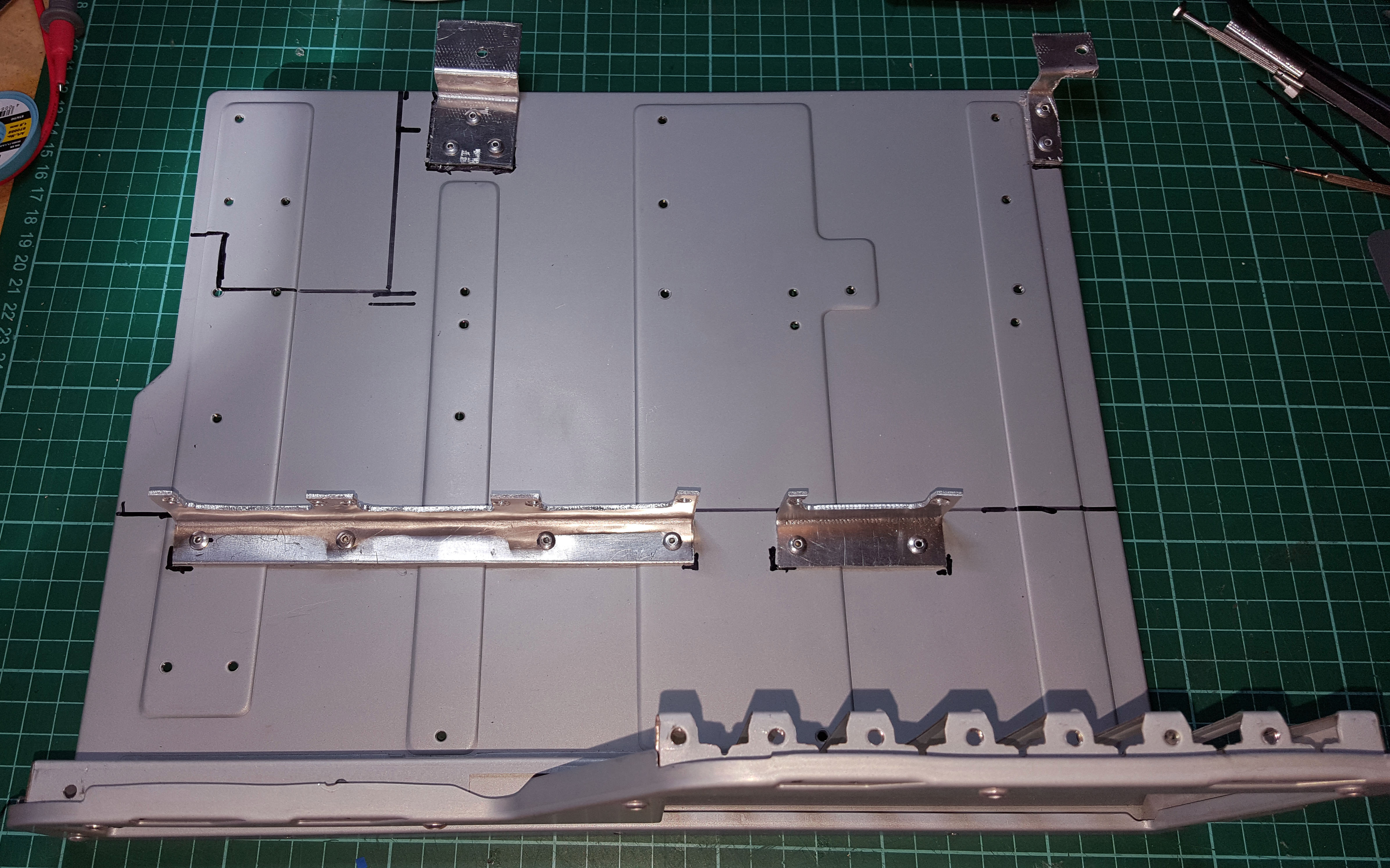 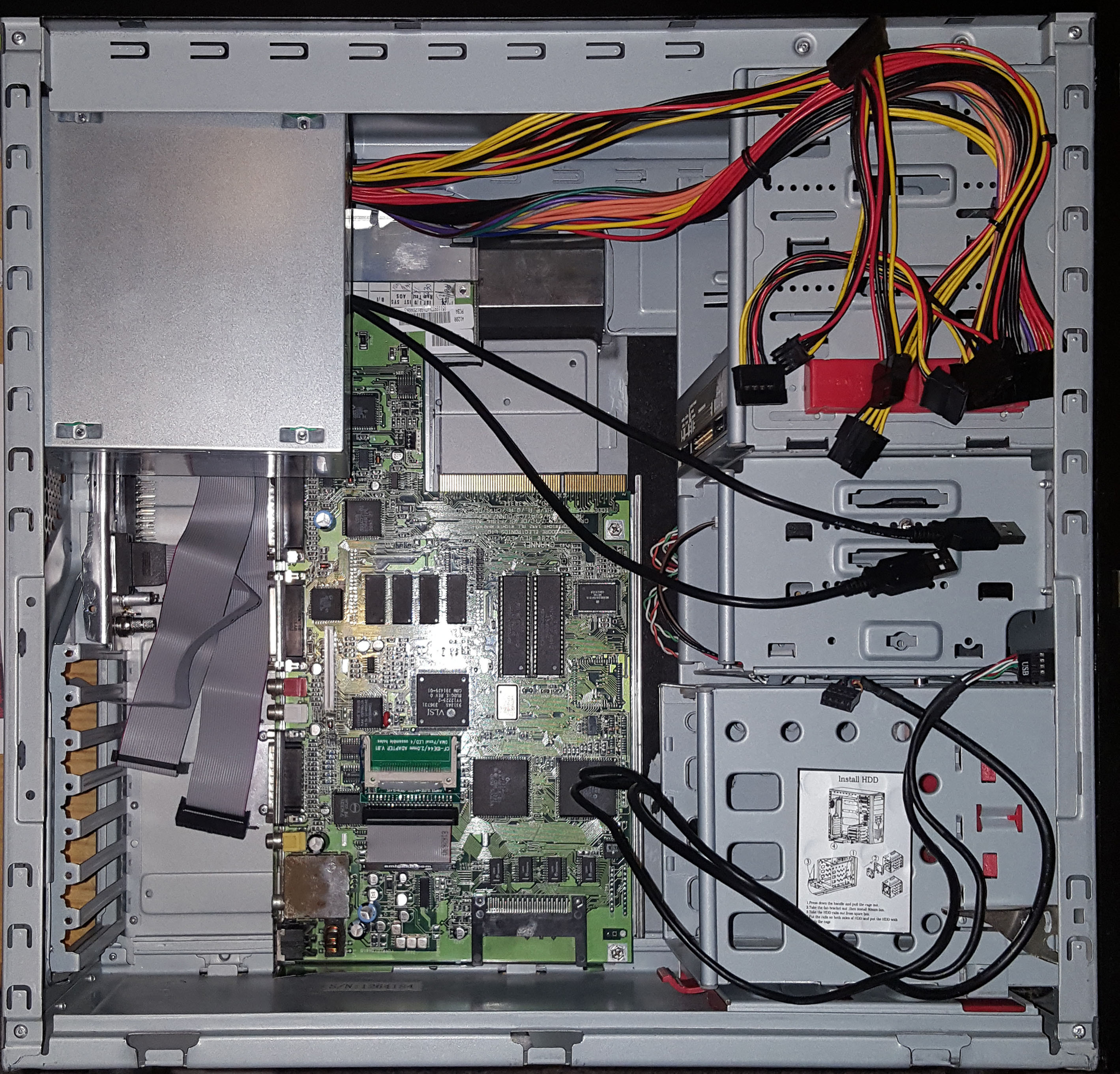 So far it looks real nice and neat on the inside. I’ll soon fix that 🙂 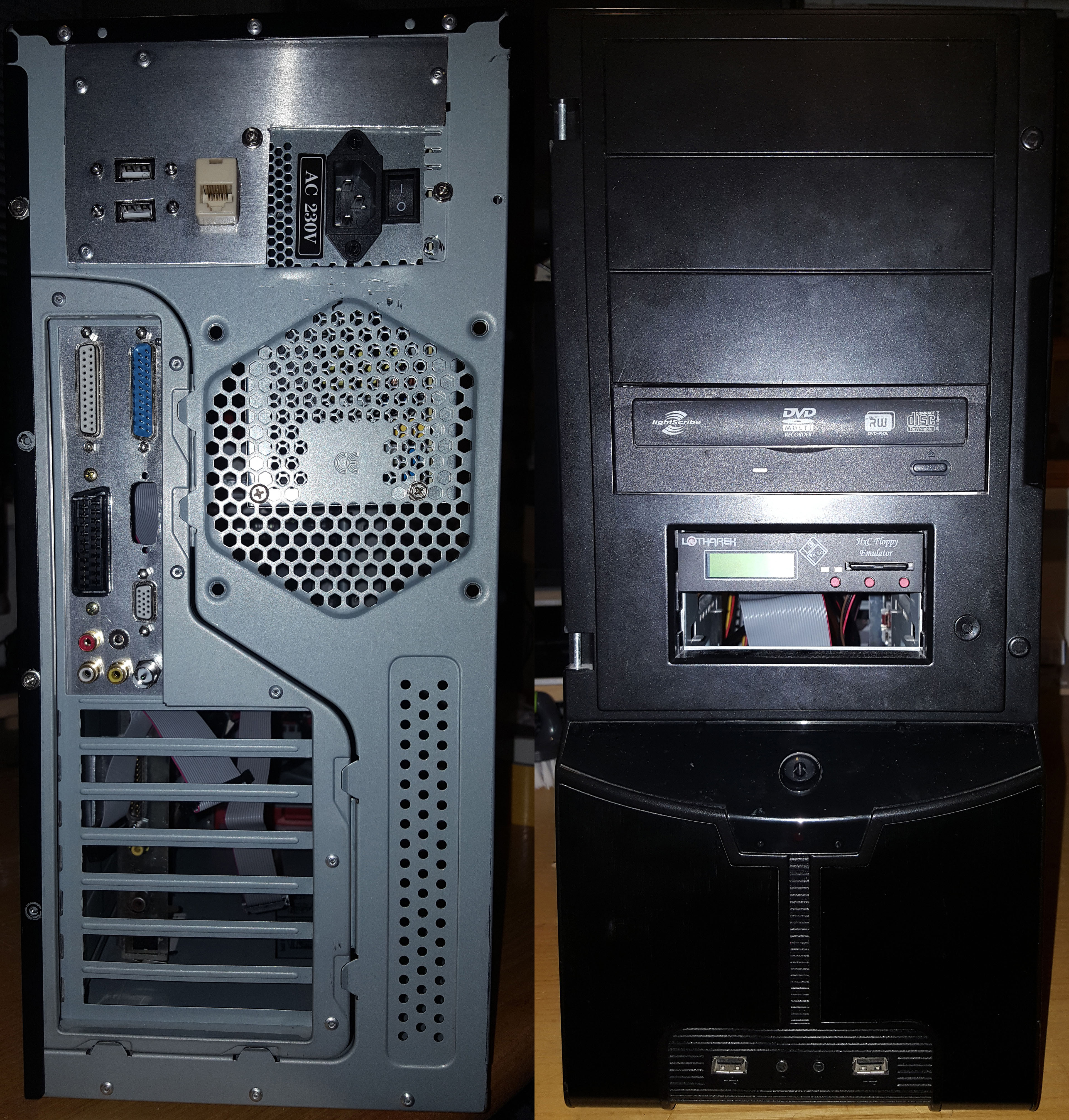 More aluminium plate to cover the gaping hole at the top.

Those are not true USB’s, the top one can only handle a PS/2 compatible USB keyboard and the bottom is for the PS/2 compatible USB mouse previously mentioned. Later on I will probably add real USB’s to the front plugs via a daughterboard on the clock port.

A RJ45 coupling will server nicely for replicating the LAN plug for my PCMCIA network card.

An old working DVD drive and a Gotek SD floppy emulator (for DF0) already sits ready and waiting to be connected.